After nine months of anxiously waiting, finally the day was here, September 25th 2013, we were blessed with the birth of our fourth child. She was as beautiful as could be and perfect in every way she was everything that we imagined and more. We named her Adalyah. This was the beginning of her journey and ours. As we were preparing to leave the hospital we got a bit of unexpected news. We were informed that she had not passed her hearing screening and that we should return in week to retake it. We were told that this result was not uncommon and that occasionally it takes some time for a newborn's ears to clear.  We were patient and we did as instructed but after three additional screenings we continued to receive the same result. She did not pass. After taking one last test that was recommended, an ABR, we found out that Adalyah had profound bilateral hearing loss.

We were lost; unsure of the next steps and unsure of the cause. Were we to blame? What had we done wrong? A range of emotions consumed us until finally clarity emerged from the confusion. We needed to focus on what we could do next and what our options were. This was all new to us, and after careful and prolonged thought and weighing all of our options we decided it was time to start the process for cochlear implantation.  The day of the surgery had arrived, August 1st 2014. We were both anxious and hopeful as well as frightened. Our baby that had not even celebrated her first birthday was about to go into surgery.  Three hours after giving Adalyah a kiss and laying her down in the O.R. we got the news that all had gone well and we would be able to see her again.  She did not react well to the anesthesia wearing off, she was frantic and uncontrollable, she ripped off all of the dressing and it took a couple of nurses the doctor and us to calm her down and redress the incision. The first couple of days after the surgery were the hardest. She could not sleep and would constantly try to remove the bandage. As the days went by everything went back to normal and we were no longer fearful, only anxious for the day that she would hear our voices.

Once again a new day had arrived, August 18th, 2014 , the day of Adalyah's first activation. This was the day we were waiting for.  Her cry was her first reaction to sound; and we rejoiced and were filled with tears and relief. Everything that we had gone through and done had finally resulted in what we had hopefully anticipated. Adalyah was able to hear us.  She was able to hear us sing and whisper and laugh, and with time we would be able to hear her words.  But we never thought we would still have one more obstacle to cross.

It was impossible to keep the processor in place, which meant less active and productive time with it on and would in turn would slow down her development.  We tried all possible solutions that were available and nothing worked for us, from wig tape to head bands and everything in between. They would either not consistently work for us or she would not tolerate having them on.  So from necessity and desperation an idea was born. What if there was a product that would retain and secure the processor in a way that would not be cumbersome or uncomfortable and would also serve as a decorative accessory?  So we went to work and after a few different designs and modifications we finally had something that worked.  We literally went from repeatedly putting it back on every five minutes, to putting it on once in the morning and removing it at night while she slept after an entire day of use.  She now had everything she needed to continue her journey.  As we stand and get ready to continue on along the same path, we take her hand and see her strength and we see that Adalyah is beautiful and perfect in everyway. 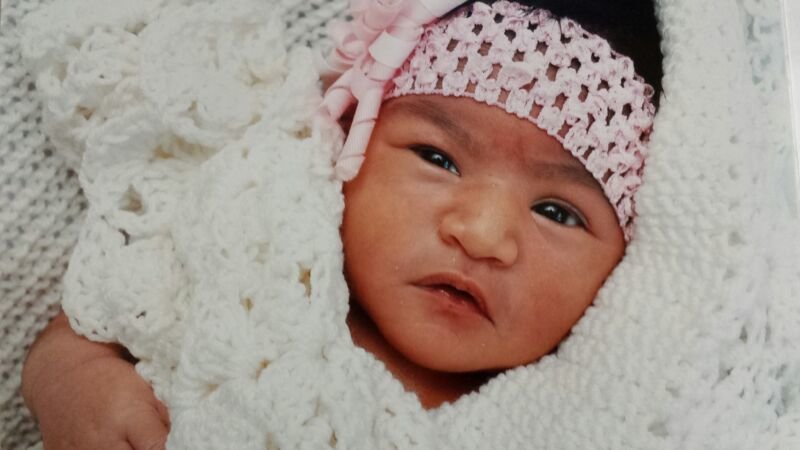